Private Internet Access streams US Netflix on fast, throttle-free servers. However, the VPN only unblocks one other Netflix library, and it doesn’t work on Apple TV, PS4/PS5 or Smart TVs. Frankly, there are much better VPNs than PIA for Netflix.

Private Internet Access (PIA) is a fast and secure VPN. It has a large server network and comes with apps for all major platforms, but can it stream Netflix content from other countries?

Our research found that PIA VPN can be used to watch Netflix in the US and Italy.

Here are the Private Internet Access servers that work with Netflix:

However, there are a few downsides to using Private Internet Access VPN to stream Netflix.

Firstly, it doesn’t unblock nearly as many Netflix regions as other top VPNs. For example, ExpressVPN and PrivateVPN access over 10 major libraries.

Secondly, Private Internet Access’s Smart DNS feature does not work with Netflix. Therefore, it’s much harder to use the VPN on streaming devices that don’t allow VPN apps, like Apple TV, Roku, and games consoles.

That said, PIA does come with good apps for Fire TV Stick and Android TV. You can also install the VPN on a router to which your other streaming devices are connected.

In this guide, we’ll cover in detail how to use PIA to watch Netflix, and what to do if the VPN stops working. We’ll also suggest VPN alternatives in case you want to change service.

Expert Advice By maximizing its 30-day refund guarantee, you can use PIA for 30-days risk-free.

To stream Netflix US, UK, Canada and more, we recommend using ExpressVPN. It’s the best streaming VPN, and you can try it virtually free for 30 days.

Netflix is constantly taking new steps to prevent VPN users from circumventing its regional restrictions. It does this to comply with the licensing agreements it has with copyright holders.

If Netflix detects that you’re using a VPN, it will only show you its original video content (Netflix Originals). This content is available worldwide, and free of licensing restrictions.

In this section we provide some workarounds to get the VPN to work with Netflix.

When you run PIA, it will automatically connect to a server, usually the one closest to you. However, to watch a foreign Netflix library, you will need to connect via a server in that country.

Make sure you’re connected to a server in the US, UK, France, Germany, Italy, or Japan, since these are the only Netflix libraries PIA works with.

2. Connect to a different server in the same country

In our latest tests, PIA didn’t always unblock American Netflix on all its US servers. This was especially true when using the Amazon Fire TV app.

To get PIA working with Netflix, try connecting to another server in the same region. PIA has thousands of servers in the US, so you will eventually find one that works.

To see which Private Internet Access’s servers are currently working with Netflix, see our table.

Make sure you are using PIA’s DNS servers and not your ISP’s default ones. Otherwise, Netflix will more easily detect your true location.

To enable this, in the PIA app go to Settings > Network > Name Servers > Built-in Resolver. Then, refresh Netflix or relaunch the app.

One of the above methods should get PIA working with Netflix. But if you’re still having problems, there may be an issue with your connection.

PIA works with Netflix, but it’s far from the best VPN we’ve tested. In the dedicated section of this page, we’ll tell you about alternative VPNs that work more reliably.

Expert Tip: ExpressVPN is the best Netflix VPN, unblocking 10 popular regions like the US, UK, France, Germany and Japan.

Here’s how to use PIA to stream Netflix:

Watch the video tutorial below to see how simple it is to use PIA VPN with Netflix:

Only connect to the PIA servers verified to work with Netflix. Otherwise, you may not be able to access the streaming service. 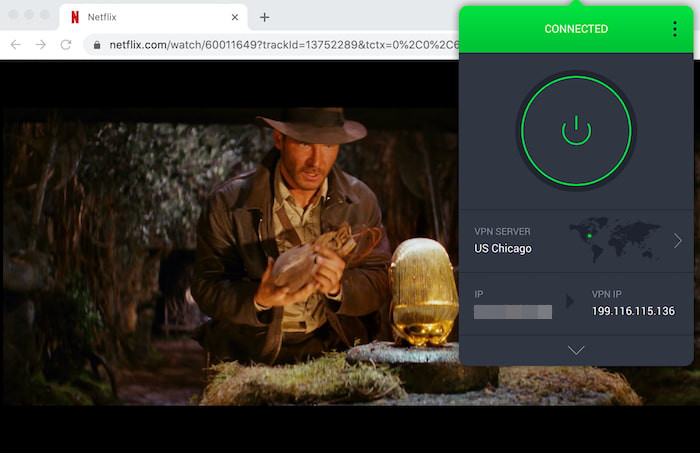 Private Internet Access is a highly-rated service overall, and a good Netflix VPN.

The VPN service reliably works with Netflix in the US and Italy. Sadly, PIA cannot access Netflix libraries in other countries, such as Japan, Canada, or Australia.

On the whole, there are better VPNs than Private Internet Access if streaming Netflix is your main priority.

Here’s a summary of the pros and cons of using Private Internet Access with Netflix:

In the rest of this section, we detail the benefits and drawbacks of using PIA with Netflix.

Using any VPN will always result in a speed reduction. As you’ll be connecting to PIA servers in different countries, long-distance connection speeds are the most important.

Therefore, wherever you’re located, you’ll be able to stream Netflix content in HD or 4K with no buffering or lag.

Here are the speeds we recorded with PIA on our 100Mbps connection in London, UK:

Despite its adequate speed performance, PIA cannot match the speeds of other top streaming VPNs.

Based our most recent manual speed tests, Private Internet Access is the sixth-fastest VPN, behind NordVPN, Surfshark, and ExpressVPN.

Our automated speed test recordings also support the findings above. The graph below shows how PIA’s speeds are slower and less reliable connecting from the US to the UK.

However, if your baseline internet speed is slow, we recommend considering a faster VPN, like ExpressVPN or Surfshark.

Server network size and server locations are important when choosing a VPN for Netflix.

PIA has more servers than any other VPN service. It has 17,193 servers in 84 countries.

In addition, user bandwidth is spread out over a greater range of servers, resulting in minimized server load and faster speeds.

These servers are placed within the general list, and not in a separate part of the app. Just search ‘Streaming’ to find them. They are located in the US, UK, Italy, Japan, Finland, and Sweden.

Sadly, our PIA VPN tests revealed that the US, UK, Japan, Sweden, and Finland servers don’t work with Netflix. 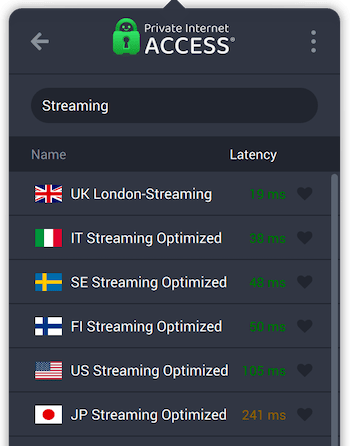 These servers do work more consistently with other popular streaming services, like Disney+, Hulu, and Amazon Prime Video.

The VPN encrypts traffic using the AES-256 cipher and uses Perfect Forward Secrecy. It also operates first-party DNS servers with leak prevention to ensure your ISP, as well as any other third parties, are unable to view your browsing history. 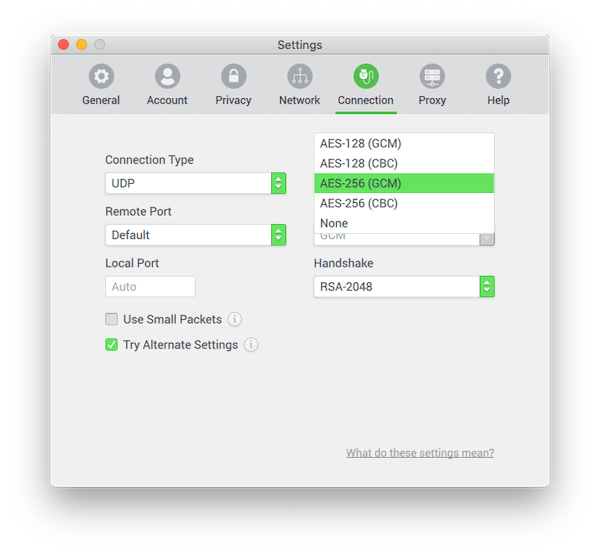 PIA’s app allows you to choose the level of encryption.

For Netflix streaming, the biggest drawback of PIA’s privacy and security features is that it has no native support for network obfuscation.

This means it’s unable to fully mask the fact that network traffic is being rerouted through the VPN. Thus, Netflix may be able to identify VPN connections and block them, as it is already doing for libraries in Canada, Australia, and other regions.

Apps for Most Devices, but Smart DNS Doesn’t Work

You can use Private Internet Access to watch Netflix on your phone, tablet, computer, or TV. The VPN has native apps for Windows, macOS, iOS, Android, Fire TV, and Android TV.

You can use PIA on up to ten of these devices at the same time, which is double the allowance of some other popular VPN services.

The VPN also provides browser extensions for Chrome, Firefox, and Opera. These provide a simple and convenient method to quickly change your Netflix region. 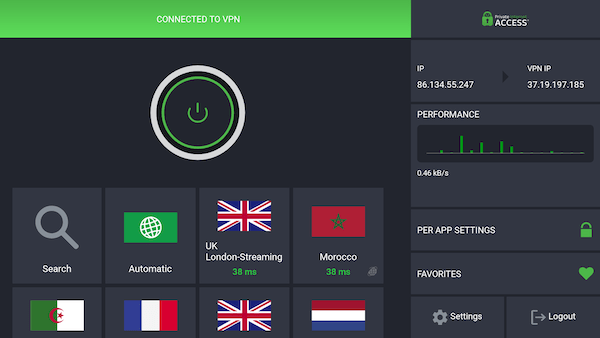 However, there are a couple of major drawbacks if you want to use PIA to unblock Netflix on your TV.

Firstly, the VPN’s Smart DNS feature does not unblock Netflix. You won’t be able to easily access geo-blocked Netflix libraries on your PS4 or Apple TV.

To get PIA to work with these devices, you’ll have to install the VPN on your internet router. However, this is a complex setup process, and we only recommend it for advanced VPN users.

Secondly, when using the VPN’s Fire TV app, we were only able to unblock Netflix on 25% of US servers. This is significantly less reliable than its desktop and mobile apps. We encourage PIA to issue a fix for this as soon as possible.

How Does Private Internet Access Compare to Other Netflix VPNs?

Although it is a reasonable option for streaming Netflix, PIA is not as good as ExpressVPN and some other popular streaming VPNs.

Here’s a table comparing how the three top Netflix VPNs compare to PIA:

ExpressVPN: The Best VPN for Netflix

ExpressVPN unblocks 10 Netflix libraries, including the US. It’s one of the fastest VPNs we’ve tested and, unlike PIA, offers a Smart DNS to unblock Netflix on an Apple TV or PS4.

While PIA doesn’t use any server obfuscation techniques, ExpressVPN uses it to hide VPN traffic among regular HTTPS traffic.

The only notable drawbacks are its high price and the fact it doesn’t unblock the popular Netflix libraries of South Korea and India.

Surfshark is one of the cheapest VPNs for unblocking Netflix, and it consistently unblocks 11 Netflix libraries. It delivers fast speeds across its server network, has an impressive app for Amazon Fire TV, and even works on game consoles.

Though it does have a much smaller server network than PIA, we found that almost all the servers worked with Netflix. We were also able to stream other popular sites, like Amazon Prime Video and BBC iPlayer.

If you want a cheap way to watch a huge number of Netflix libraries, Surfshark is a great choice.

The data cap means you can stream about three hours of video in full HD quality per month, or about half that if you’re streaming in 4K.

You can, however, adjust usage settings to have Netflix stream in the lowest quality, which should give you up to 30 hours of streaming.

Private Internet Access is a good VPN for streaming the US Netflix library from around the world.

Its private logging policy also makes it a great choice for those primarily concerned with online security and privacy.

However, since PIA only unblocks two Netflix libraries, and it isn’t particularly fast on long-distance connections, it’s not the best choice if streaming is your main goal.