A VPN lets you stream blocked YouTube videos by changing your location and bypassing censorship by your government, school, or workplace. This guide shows you how to access YouTube from anywhere and on any device.

Even in free democracies YouTube videos can be restricted or censored, particularly on copyright grounds or if you’re at work or school.

We’re all familiar with the error message: “Video unavailable. The uploader has not made this video available in your country.” So how do you get around it?

A VPN masks your real IP address and makes you appear in another country, getting around a network firewall in the process.

Using a VPN allows you to beat YouTube restrictions imposed by your country or network admin.

You can unblock Youtube videos in three simple steps:

Read on to discover how you can bypass strict censorship, get around school blocks, and which VPN (or proxy) you should use for each use case.

Since 2019 there have been 244 major internet shutdowns in 45 countries.

YouTube is actually fully banned in a number of countries. This includes China, Iran, Syria, and Turkmenistan.

In the map below you can see the countries that have either blocked YouTube in the past, or are currently blocking it.

Seeing names like Germany and Denmark shows that internet freedom is never guaranteed. 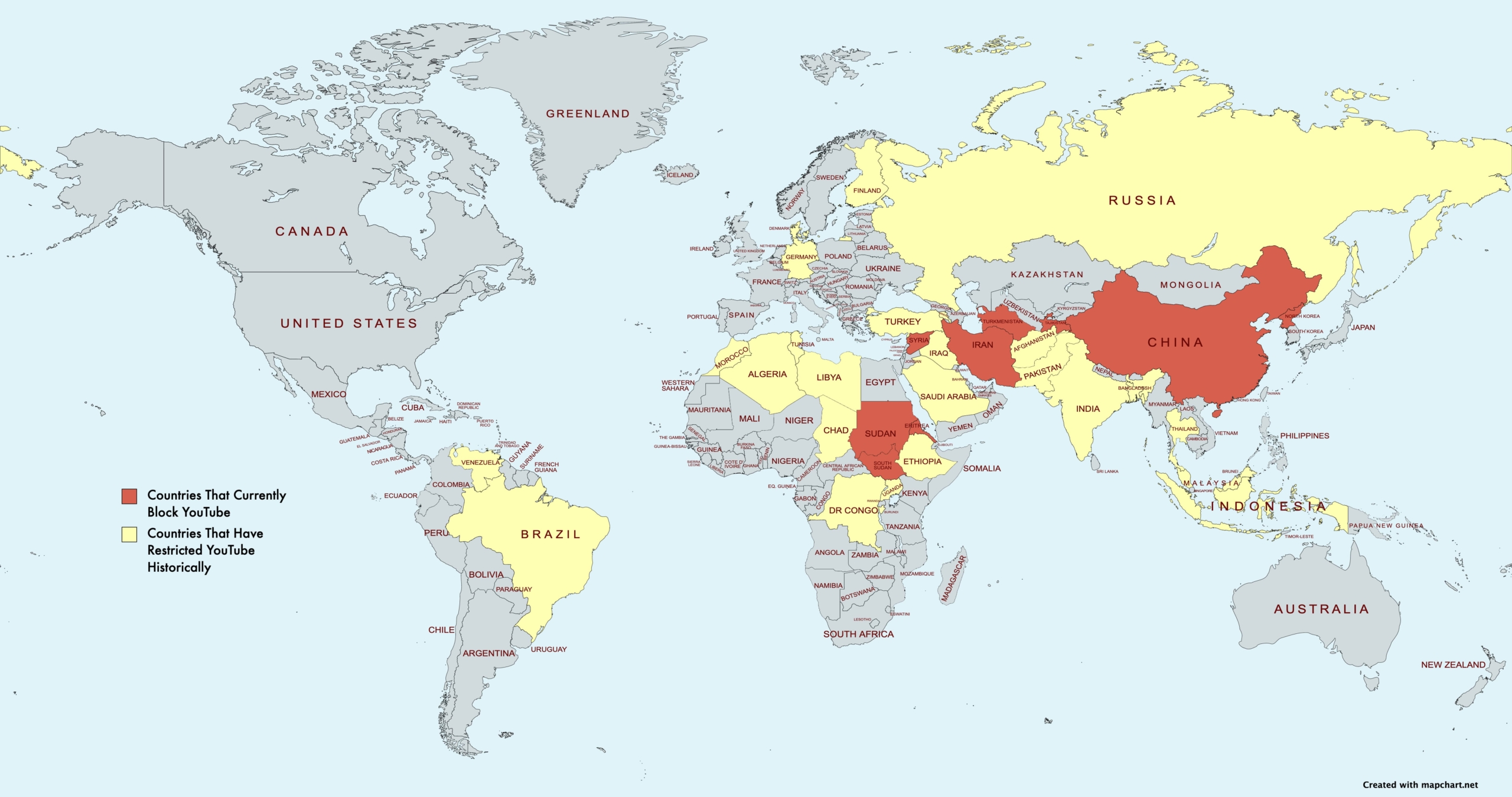 Whether you’re in a country with a permanent ban or a temporary block, you can beat this by using a good VPN.

Currently, as long as it has more than one server any VPN can get around YouTube blocks, which aren’t as aggressive as those enforced by streaming services like BBC iPlayer or DAZN.

If you’re in a country like China, use a VPN that regularly beats aggressive web censorship, like:

This has been a feature of the coronavirus pandemic, as YouTube attempts to squash the spread of misinformation.

However, no VPN can get around these blanket bans. These videos are completely taken offline.

Videos Blocked Due to Copyright Restrictions

Some geoblocks are a matter of copyright and licensing agreements. We’ve all seen the annoying error code that tells us: “The uploader has not made this video unavailable in your country.”

Unlike with China, to get around this it probably isn’t necessary to purchase a VPN. You can get a free VPN and it should work just fine.

Or, you can use a proxy, which you can read more about here.

All you need to do is choose a safe free service, install it, and select the country in which the video is available.

If you can’t access a specific TV show clip, a music video or a movie, launch the VPN and select an appropriate server location. Once connected, YouTube will think you’re in the right country, and play the video.

EXPERT TIP: Use a YouTube region restriction checker to see where certain videos are available or unavailable by copyright laws. This is very useful if you’re looking for a server on which you can watch the video.

However, there are risks with some of the most popular free VPNs, like Hola VPN. Many free VPNs take your data and sell it, and barely offer any privacy protection at all. Some have even been known to install malware and viruses.

We recommend you use any of the below free VPNs, which we’ve verified as safe:

For the purpose of watching YouTube, though, they can be a great tool. Especially if you’re only interested in watching a video blocked on copyright grounds every now and again.

A VPN is the most effective solution to get around school bans on all devices, including school computers, laptops, or Chromebooks.

But we caution against potentially unsafe free VPNs. The last thing you want is to inject malware onto your school device.

Not many websites tell you this, but it’s important to know that even with the best VPN your school might know you’re using a VPN. This is because the WiFi admin can see encrypted packages being sent to the school server from a specific device, even if they don’t know the contents of the package.

Although VPNs are the simplest and quickest way to unblock YouTube, if you want to avoid detection entirely there are other methods to unblocking YouTube, including:

Many school networks only block certain domain name URLs for websites and not the underlying IP addresses. This means if you know a website’s IP address you can enter it manually into your browser and view the blocked website.

It’s worth knowing that the domain name of a website (Top10VPN.com, for example), is not the same as the IP address that directs your traffic. Although the URL is blocked, the website IP address is not.

EXPERT TIP: To find a website’s IP address you can open the Command Prompt and then type tracert followed by the domain name, i.e. tracert top10vpn.com.

It’s very rare that a school blocks Google Translate because of its usefulness in education settings. You can actually use this to your advantage and get around school YouTube blocks.Here’s how you do it:

This neat workaround should work with any search term you want to search for.

All you have to do is copy the YouTube video URL from search results and paste it into a YouTube video downloader website. There are many of these websites available online.

This allows you to download a file directly onto your device that you can watch offline.

The downside of this workaround is that you have to know the specific video you want to watch. It’s also more time consuming.

EXPERT TIP: Although many websites claim it, adjusting your URL slightly will not unblock YouTube at school.

But the very best VPNs for YouTube have lots of global servers, fast speeds, and easy to use apps. This way you can connect to countries across the globe, avoid annoying buffering, and use the technology with zero problems, even if you’re a beginner.

If you’re in a country with strict internet censorship, a free VPN won’t cut it. You need robust encryption, watertight privacy, and obfuscation tools. Even in free speech countries, these features are great if you don’t want YouTube or Google tracking every video you watch.

EXPERT TIP: It’s good practice to watch YouTube in incognito or private browsing mode with your VPN running to stop your searches being associated with your Google account.

On top of that, you’ll need to consider what devices you like to watch YouTube on. Some VPNs are available on desktop computers as well as phones, tablets, smart TVs and Chromebook. Others, however, might be limited to mobile or desktop.

For example, if you’re fond of streaming YouTube from your Fire TV Stick, it’s worth getting a VPN that has a quality app for this (many don’t).

If you like to watch YouTube on your phone on your way to work, on your laptop at your desk, and then on your sofa at home with the Fire TV Stick over the course of a day, it’s worth getting a premium VPN that allows up to five simultaneous devices running the VPN under one account.

Free VPNs, on the other hand, can be limiting due to single device restrictions.

Yes, you can use a proxy to unblock YouTube.

YouTube restrictions are much easier to bypass than premium streaming services like Netflix or BBC iPlayer. A simple proxy often does the job. 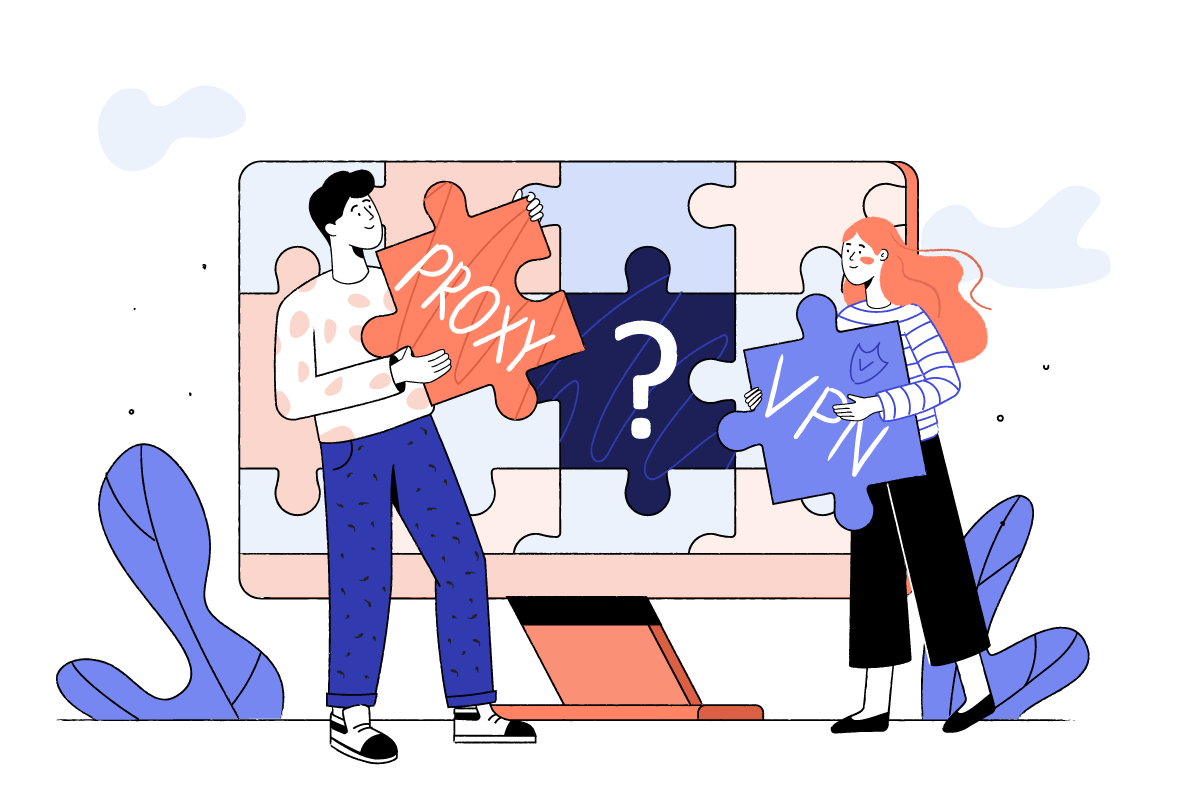 Proxies can be just as effective at unblocking YouTube videos.

A proxy gets around firewalls by visiting the website on your behalf and relaying the content back to you. You never actually visit the website and so the block never takes effect.

Proxies can be a quick and useful tool if your YouTube needs are less demanding and privacy is less of a concern to you. That’s because they don’t provide the same level of privacy and reliability as a VPN. Proxies don’t encrypt data like a VPN does.

This allows ISPs, school network administrators, and governments to see what videos you watch even with a proxy. These proxies might also be logging and selling your data, too. For this reason, they’re not as safe or private.

A VPN is by far the safest, most effective, and most reliable way to unblock YouTube. But if you’re looking to unblock a single video or two at home, a proxy can be a quick and useful alternative. There are many free proxy servers and browser extensions available online, such as KProxy, Ultrasurf, ProxTube, and Whoer.

To get around YouTube blocks with a free proxy, we recommend installing browser extensions from any of the following VPN providers:

These are all free and available to add to Chrome or Firefox browsers instantly with no registration required. They’re a quick and easy way to unblock YouTue and they’re from trustworthy VPN companies, so there’s no risk involved.

YouTube TV is an US exclusive streaming service that allows you to stream sports, TV shows, and movies from over 85 networks.

If you already have a YouTubeTV account a VPN will enable you to continue streaming content while you’re abroad.

However, if you’re not based in the US and want the benefits of YouTube TV, you’ll also need a payment method registered in the US and a zip code before you can sign up.

It is available in most countries but not all of them. You can find the full list of available countries here.

If you live outside these countries and still want the benefits of YouTube Premium, you can use a VPN to register.

However, as with YouTube TV, this isn’t as simple as connecting to a server and unblocking a video. You’ll need to have a payment method linked to one of these countries available, either a credit card or PayPal account.

Even if YouTube can detect VPNs, it doesn’t seem to care much as most VPNs work almost all the time to unblock the video platform.

It’s another story when it comes to the premium YouTube TV, though. It uses an algorithm to track IP addresses and detect VPNs. This is why you might get an error message that reads: “YouTube TV VPN Proxy Server Detected.”

Unblocking YouTube is entirely legal in the vast majority of countries across the world.

There are, however, a few countries that have made using VPNs illegal, whether it’s for YouTube or anything else.

VPNs are illegal in the following countries:

As well as that, there is nothing specific in the YouTube terms of service that says you cannot use a VPN or proxy.

One section forbids you to “circumvent, disable, fraudulently engage, or otherwise interfere with the service,” but it’s highly unlikely this can be used to justify kicking you off the service. We’ve never known a case of someone being penalized for using a YouTube VPN.

Unblocking YouTube at school or work is not illegal, either. But there’s no guarantee that you won’t get told off for doing it if discovered. Network administrators can detect the use of VPNs even if they don’t know what websites you’re visiting.