Hola VPN is one of the most popular free VPN services around, with over 239 million users. This guide provides an overview of the Hola VPN Chrome extension, including why Google has recently blocked it, why it isn’t safe, and how to properly uninstall it from your device.

In September 2021, the Hola VPN Chrome extension was removed from the Chrome Web Store due to safety concerns. Users received a notification stating the add-on had been blocked because:

NOTE: If you’ve received this notification, then Google has automatically disabled the Hola VPN Chrome extension for you. However, this won’t have removed it from Chrome entirely. We explain how to completely uninstall Hola VPN from Chrome later in this article.

In this guide, we’ll tell you everything you need to know about using Hola VPN with Chrome. We’ll explain why the Hola VPN Chrome extension was blocked, why it isn’t safe to download, and how to remove it from your device.

We’ll also introduce some free alternative VPNs for Chrome that are better and safer to use in your Google Chrome browser.

For new users, this means the Hola VPN extension has now been removed from the Chrome Web Store, so you can no longer download it.

For existing users with Hola VPN already installed on Chrome, the extension has been permanently disabled and does not work.

Hola VPN will still appear as one of your downloaded add-ons under ‘Manage Extensions’, but you can’t actually use it. The add-on is turned ‘off’ and users are unable to turn it ‘on’ themselves. 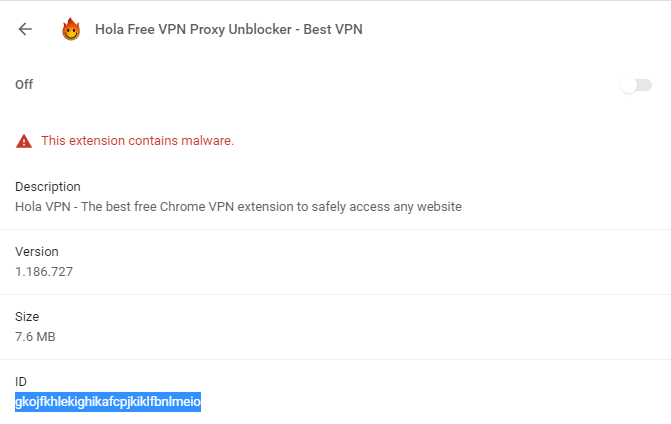 You can download Hola VPN’s macOS or Windows applications to continue using Hola VPN while browsing in Chrome.

Once turned on, the PC and Mac apps will funnel all your device’s internet traffic through Hola’s network. This also applies to software outside of Chrome.

Despite claiming the contrary on its website, Hola VPN’s Mozilla Firefox and Microsoft Edge browser add-ons are also no longer working. These were removed around the same time as Google removed Hola VPN from Chrome.

The only browser that still supports an Hola VPN extension is Opera. However, the Opera browser has its own privacy issues.

Why You Shouldn’t Use Hola VPN with Google Chrome

Hola has explicitly denied any suggestion that its Chrome extension contains malware, labeling the claim as “obviously false” and reassuring customers that it is working with Google to resolve the issue. 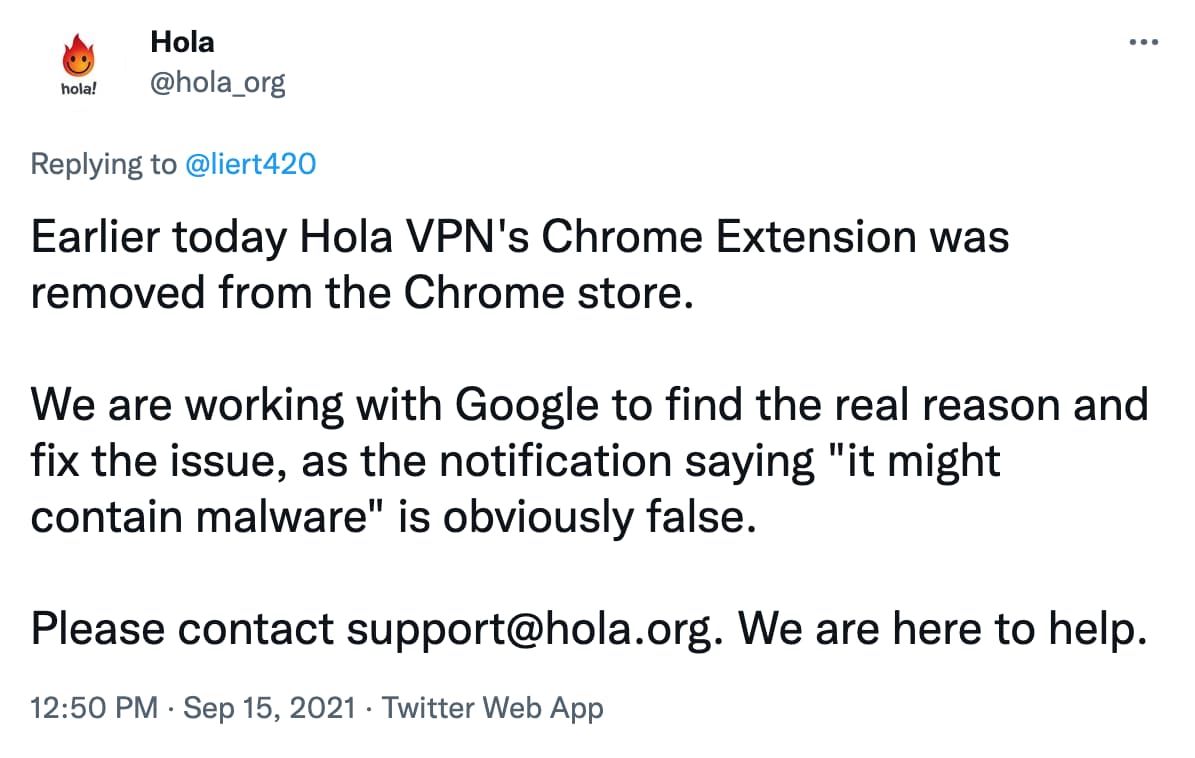 Now the extension has been disabled, it is essentially impossible to verify whether it contained malware or not. However, it is possible to state that Hola VPN is not a safe VPN service to use, on any device or browser.

Hola VPN puts your privacy and security at risk simply by having the software installed. It logs almost everything you do online, has a history of security breaches and vulnerabilities, and doesn’t even encrypt your data if you’re a free VPN user.

We don’t recommend using Hola VPN on any browser or device, including Google Chrome.

In this section, we’ll take a detailed look at the reasons why Hola VPN is unsafe to use with Chrome and in general.

Skip to the next section if you’d rather learn how to remove Hola VPN from Chrome, or check out our recommendations for three alternative VPNs that are better and safer than Hola VPN.

Hola has one of the most privacy-unfriendly logging policies we’ve ever seen. The company openly admits to recording and storing information about its free users such as:

This is an excessive amount of data for a VPN service to collect from users, especially given that they retain the information for “as long as necessary”. It’s very likely that they’re sharing your data with third-parties, too.

There is simply no need to use a VPN with this level of disregard for your online privacy. It is one of the primary reasons why we advise readers to remove Hola VPN from their device.

Hola Free VPN does not work like a normal VPN service.

Usually, VPN services will own or rent a network of servers located around the world. When you turn on the VPN, your traffic is routed through one of these private servers. This means the websites you visit see your connection originating from the location of the VPN server, and not from your true location.

By contrast, Hola VPN uses a peer-to-peer (P2P) network which routes your connection through another Hola users’ device on its way to the internet. Your traffic takes on their IP address, allowing you to access websites that are available in their location, but not yours.

Hola describes its P2P network as a “community-powered VPN”.

The P2P architecture lets Hola operate with significantly reduced costs because they don’t have to own and operate a network of servers themselves.

However, it puts users’ privacy and security at risk. By signing up to Hola Free VPN and using it with Chrome, you agree to join the P2P network. You agree to let other Hola members use your IP address for their own online activity. That means someone you don’t know could do something illegal online, and it would be traceable back to you and your device.

Being a peer in the network also means providing Hola with access to some of your device’s bandwidth. Not only is this a possible security threat, it’s also going to be costly if you have a slow internet connection or a monthly data limit.

The service claims to take bandwidth only when your device is charging and not in use, up to a maximum of 3MB a day on mobiles or 100MB on desktops. However, this is still concerning.

NOTE: Hola’s FAQ section states that the Chrome extension “operate[s] as a standard VPN service, and [is] not part of the Hola VPN peer-to-peer network”.

There are no extra details to evidence this claim, but if accurate it suggests the Hola VPN Chrome extension was not susceptible to the risks associated with Hola’s P2P architecture. Users were still subject to the company’s intrusive logging policy, though.

3. Hola Has A Controversial & Untrustworthy History

Because Hola VPN gives other users access to your device’s idle resources, the software is repeatedly at the center of events that highlight the company’s lack of transparency, security and care for its users’ privacy:

EXPERT TIP: Since Google blocked the Hola VPN Chrome extension, a number of APKs and cracked versions of the add-on have been created. We strongly advise against downloading one of these – not only for the reasons outlined above, but also because APK files and cracked software from unknown sources may often contain malware of its own.

4. No Netflix, No Torrenting & No Encryption

In addition to all of the privacy, security, and transparency issues described above, the fact is that Hola Free VPN is simply not a very good VPN service.

While its speeds are somewhat quick, our Hola VPN tests show the VPN doesn’t unblock Netflix, BBC iPlayer or Hulu.

In other words, you won’t be able to stream international content on Chrome regardless of which version of Hola VPN you’re using.

Hola also blocks all torrenting and P2P traffic on its network. Morever, the VPN doesn’t work in China and other highly-censored nations.

Most worryingly, Hola Free VPN doesn’t encrypt your data in any way. Your traffic is sent to the other nodes in the network unprotected. There is no kill switch, leak protection or split tunneling features, either.

You can avoid becoming an exit node in Hola’s P2P network by upgrading to Hola’s Premium VPN subscription. It costs $2.99 a month (if you sign up for 3 years) or $14.99 for a rolling monthly subscription.

The premium service works more like a standard VPN and does use AES-256 encryption, as well as the IKEv2 protocol and a kill switch. That said, you’ll still be subject to Hola’s invasive logging policy and, for that reason, it’s not worth the risk.

There are cheaper VPNs that work better, are more privacy friendly, and are operated by more trustworthy companies.

How to Uninstall Hola VPN from Chrome

To remove the Hola VPN extension from Chrome:

If you’ve ever installed the Hola VPN client elsewhere on your device, then you should also uninstall that. Adios Hola provides a helpful selection of removal guides covering a number of different devices.

EXPERT TIP: You can email [email protected] to request the removal of your Hola account and all of the data associated with it.

Hola VPN’s Chrome extension was never a safe VPN for Chrome, even when it was available. Now that it’s been blocked by Google, you should consider upgrading to a more effective and safer alternative.

EXPERT TIP: The overall best Chrome VPN extension is ExpressVPN. It’s fast, highly-secure, and unblocks 10 Netflix libraries. You can even test it for free for 30 days.

Hotspot Shield is an excellent VPN that offers both free and paid versions of its service. The VPN’s free Chrome extension is currently our top recommendation due to how fast, secure, and easy-to-use it is.

Unlike Hola Free VPN, Hotspot Shield’s Chrome extension is a fully-functioning VPN. That means your browser traffic is securely encrypted and routed through one of the company’s private servers, so you don’t have to worry about other users using your bandwidth.

The Chrome extension is incredibly fast with speed loss as low as 1% on some connections. The free version only has one server location (East Coast US), but it easily lets you unblock and stream US Netflix from your Chrome browser.

HideMyAss’ Chrome extension is also popular and completely free. It isn’t as fast as Hotspot Shield, but it’s just as easy to use and it lets you connect to VPN servers in five different locations:

Our streaming tests found that only the US server was able to unblock Netflix. Given that US Netflix is usually the most in-demand, that shouldn’t be too much of an issue.

Despite advertising itself as a proxy, HideMyAss does use encryption to protect your Chrome browser traffic. It includes an effective WebRTC blocking feature, too.

Unfortunately, the company’s logging policy isn’t as private as we would like. Users of the Chrome extension have their originating IP address, domain names and connection timestamps logged. This information is only stored for 30 days, but it is still a disappointing invasion of user privacy.

3. Windscribe: 14 Server Locations But Not Encrypted

Much like the NordVPN Chrome extension, Windscribe’s Chrome extension is not a full VPN like Hotspot Shield or HideMyAss. This means it’s capable of geo-spoofing your location, but it will not encrypt your traffic.

Windscribe is still an excellent free Chrome extension for casual browsing. You can pick between an impressive 14 server locations, including city-level choices. The speeds are good and Windscribe is the only free Chrome VPN we’ve seen that is capable of spoofing your HTML5 geolocation.

In our latest tests, Windscribe’s free Chrome extension did not work with any international Netflix libraries. The VPN’s free service also comes with a generous but still restrictive 10GB data limit.