Free Android VPN apps are everywhere in Google’s Play Store, but many are unsafe to use.

Based on our speed and security tests, the best free Android VPNs in 2022 are:

The VPN apps above are fast, safe, and completely free to use on Android 12.0, 11.0, and older AndroidOS versions.

NordVPN is fast, secure, and unblocks popular streaming platforms. Get a 7-day NordVPN free trial on Android or try it for free for 30 days on all other platforms.

Here are some of our key VPN testing statistics:

The table below compares the five best free VPNs for Android and how they perform in each of our key testing categories:

Why Do I Need a Free VPN on Android?

Using VPN software on your Android device is an excellent way to protect your internet security and anonymity.

A high-quality free Android VPN may not have many advanced features, but it will mask your IP address, and encrypt your web traffic.

If you don’t use a secure VPN, your ISP (Internet Service Provider) can monitor what websites and apps you use, and what files you download.

A secure VPN hides your IP address to prevent third parties detecting your true geo-location. This lets you browse the web privately on an encrypted connection.

Are Free VPNs for Android Safe?

Millions of people use potentially unsafe free VPNs, and Android might be the platform with the most dangerous free VPNs.

The truth is, you simply can’t trust most free VPN services with your confidential personal data.

Carrying out two in-depth investigations on popular free VPNs for Android, we discovered an alarming amount with dubious links to China. Even worse, some VPNs had extremely worryingly security flaws.

The charts below highlight the extent of dangerous free VPNs currently in circulation: 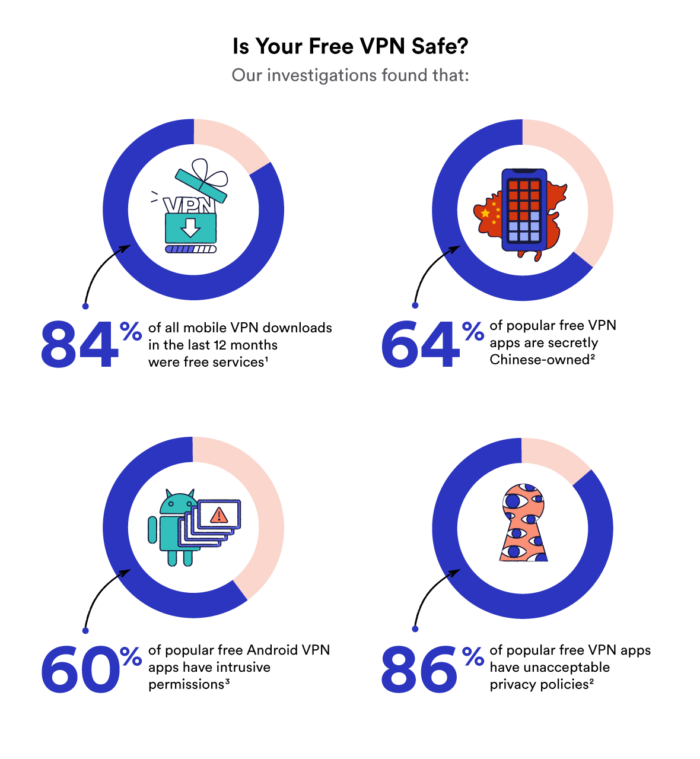 The free Android VPNs we recommend are safe, and provide effective protection. They hide your IP address, encrypt your web traffic, and have privacy-friendly logging policies.

How to Use a Free VPN on Android

Setting up and using a VPN on Android is very simple.

Here’s how to install a VPN on android:

If you opt for a free VPN that doesn’t come with a dedicated Android app, follow our Android VPN setup instructions.

As we mentioned above, many free Android VPNs come with worrying security and privacy issues.

Below is a list of the worst Android VPNs we strongly advise you don’t use:

How We Test the Top Free VPNs for Android

Assessing an Android VPN requires looking at a unique combination of criteria. We don’t take the same approach when rating them as we do with a desktop VPN, or even a paid Android VPN.

Below is more information on how we came to the testing conclusions that you see on this page:

Read on for the specifics on how we assess these criteria, as well as our recommended standards for each one:

Data cap is by far the most important factor for a free Android VPN. No matter what you do online, and no matter why you use a VPN, it will always consume bandwidth.

You don’t need to be a VPN testing expert to know that more data is better. Unfortunately, very few trustworthy VPNs actually offer an unlimited data cap. It’s the best case scenario, but you may need to compromise if you want other specific features from your free Android VPN.

Anywhere between 4-10GB is both a common allowance as well as a decent figure for a free VPN to offer. This will allow you to stream a few hours of HD video, plus keep your general web browsing protected.

Anything less than 2GB is extremely restrictive. You’d have to be very disciplined about using your VPN, making sure to only activate it when absolutely necessary (for example if you do some online banking on public WiFi).

Whether you’re on WiFi or using cellular data, a VPN will negatively affect your internet speeds. But, most importantly, the best free VPNs will affect them as little as possible.

Our testing has found that many free VPNs offer speeds noticeably slower than their paid app counterparts. That’s why we make sure to manually test the speeds of every free VPN we review on a regular basis.

While free VPNs can be slower than paid ones, our expectations for the bare minimum you should accept remain the same. There’s no reason for a good VPN, free or otherwise, to slow down your internet by more than 40% on a nearby connection. And an ideal one will still slow it by less than 20%.

Something you should bear in mind, however, is the reduced server list of most free VPNs. If your free VPN does not offer a server in the country you live in then you will have to accept slower speeds.

Our speed testing process for free Android VPNs is simple. Using a Galaxy S9, we connect to as wide a spread of global servers as we can, and record their speeds via speedtest.net. We compare the figures recorded to the figures with no VPN connected, and see how large the drop-off is. We always use the same 100Mbps wireless office test connection. Download speed is prioritized, but upload and latency is also considered.

Since we’ve only used speed test data collected on an Android, the results may vary from our reviews and other pages.

Minimum Requirement: Can access at least one Netflix library – ideally US or UK.
We Recommend: The above, plus a streaming library from at least one other country.

You should not expect to get a top-quality streaming VPN for free.

Maintaining streaming servers and working sets of IP addresses is both costly and time consuming for VPN providers. Naturally the best performing ones go to paying customers.

That said, you shouldn’t settle for nothing at all, either. It’s entirely possible to access at least one streaming library with a free VPN, or maybe even more. You’ll have fewer options due to a limited server selection, though, and it won’t be as consistent.

In our testing experience, streaming is where the difference between a paid and free Android VPN is felt the most. Even the very best free streaming VPNs can’t match up to their paid counterparts.

Logging policy is one area where you absolutely do not have to compromise when choosing a free Android VPN.

Most trustworthy VPN services use the same core logging policy for both their free and paid product, across all platforms.

One difference you should be aware of, though, is potential additional third party data sharing. Some free apps are subsidized via advertising and data sharing partnerships. We make sure to read through every privacy policy in full detail to make sure that your data isn’t sneakily sold on.

Almost every free mobile VPN which has no paid-for version will fail to meet the standards we set, here. Most free Android VPNs can’t be trusted, and the reason why usually lies within their privacy policy.

You should never download a VPN which stores identifiable, personal usage data. Your full IP address, browser timestamps, and DNS requests are always off limits – no good VPN will collect or store them.

We think it’s fine if a VPN stores some much more generic or shared information. The total amount of data you use in a month, how many times you’ve connected, or the total number of users connected to a server at one time are all acceptable. Information like this should be deleted every few months at most.

The perfect VPN records no account-tied logs of any kind. However, these are more rare when only considering free VPNs.

Minimum Requirement: AES-128 encryption and the IKEv2 VPN protocol.
We Recommend: AES-258 encryption, plus OpenVPN, WireGuard, or a bespoke protocol.

The Google Play Store is filled with hundreds of free apps which claim to be ‘VPNs’, but in reality only act as proxies.

While proxies may change your IP address, they do not encrypt your traffic and DNS requests. It’s important to make sure that your free VPN of choice specifies what encryption it uses.

AES-128 is perfectly safe, although we prefer the AES-258 cipher. It has been the standard for years now and is virtually uncrackable.

Many Android VPNs use IKEv2 as the primary (or only) protocol. It’s a fine choice, and strikes a good balance between speed and security.

That said, we feel that OpenVPN just edges it out as the more secure protocol. We can also fully recommend WireGuard, a newer protocol, which is faster than both IKEv2 and OpenVPN.

Finally, some services use a protocol all of their own making. It’s rare to find these in free Android VPNs, but so long as the VPN service provider is trustworthy then the protocol is likely perfectly safe.

Minimum Requirement: A bespoke, easy to use Android app.
We Recommend: The above, plus extra features like a kill switch.

Even with a free VPN, it should at the very least have a functional, bespoke Android app.

Options and buttons should be clearly labeled, with a simple layout and intuitive menus. Ordinarily we consider a VPN kill switch essential. Without it, your IP address could be left exposed should the VPN connection drop. However, they’re rarer on Android than other platforms.

With a free Android VPN, anything more than that is a bonus. Some may include extra features like app split tunneling or an ad blocker, but those are more bonuses than essential.

You should always make sure that you have downloaded the correct, official version of any Android VPN, too. Both free and paid VPN apps have many clones on the Google Play Store. Downloading these copies can result in viruses, tapjacking, URL spoofing, or any other manner of sinister side effect. Make sure that you find the official Play Store link or download the .APK directly from the VPN service’s website.