The best VPNs in Canada conceal your true IP address and unblock overseas streaming services like Netflix and HBO Max.

The most highly-rated VPNs also have hundreds of secure servers in Canada, optimized for anonymous torrenting and file-sharing.

Based on our test results in Toronto, Vancouver and Montreal, the best VPNs in Canada are:

We believe using a VPN in Canada is important. If you can’t afford a premium VPN, you can still use a secure free VPN in Canada.

Comparison of the Best Canada VPNs

The table below compares the top Canada VPNs based on their performance in our Canada-specific testing categories:

Based on our tests, Windscribe is able to reliably unblock DAZN, HBO Max and Hulu, and allows torrenting on its free servers.

However, Windscribe’s free version does have a limited choice of server locations, and it comes with a 10GB monthly data cap. It also doesn’t access

As we detail in our Windscribe review, the free VPN is good for sporadic use, the software is not suitable for regular use.

For unlimited use, you’ll have to either upgrade to the paid version of Windscribe, or use another paid-for VPN.

What's the Fastest VPN in Canada?

NordVPN has the fastest international speeds of any VPN service. It’s the best choice to connect from Canada to other countries.

Connecting from Toronto to New York, we recorded average speeds of 94Mbps – a 7% speed loss. If you want a US IP address from Canada, NordVPN is the ideal choice.

NordVPN performed the best in our manual speed tests, but ExpressVPN, Surfshark, and IPVanish were faster in our Toronto and Vancouver automated speed tests.

IPVanish in particular has never dropped below 14% speed loss on connections within Canada over the last eight weeks.

NordVPN has some of the fastest international speeds of any VPN service. It’s therefore a great choice for connecting to Canada from overseas. Or, if you want to connect abroad from Canada.

Connecting to a New York server from Toronto, we recorded average speeds of 94Mbps with NordVPN – a 7% speed loss. If you want a US IP address from Canada, NordVPN is the ideal choice.

Why You Need a VPN in Canada

A VPN is software that encrypts your internet connection and hides your true IP address from your internet service provider and third-parties.

Using a VPN in Canada will:

Below is a list of the reasons for using a VPN in Canada:

This means your browsing history, messages, and downloads are all being recorded by ISPs like Bell, Access Communications and Cable Axion.

Since 2015, thanks to the passing of the Anti-Terrorism Act, the Canadian Security Intelligence Service (CSIS) has been collecting and storing mass data on citizens.

Canada is also part of the Five Eyes Intelligence Alliance alongside some of the worst spying nations, like the US and Australia.

Your ISP, the government, and websites you visit find it much harder to identify and track you when you use a VPN.

Surveillance isn’t the only issue in Canada – internet censorship is also on the rise.

In 2017, The Supreme Court of Canada approved a corporation’s effort to censor international websites.

Canadian companies like Bell Media and the Canadian Broadcasting Corporation (CBC) also exert pressure to block websites they don’t like. They have even tried to ban VPNs due to ‘copyright infringement.’

In essence, Canadian law is no friend to internet freedom. VPN services assign you IP addresses belonging to their remote VPN server, letting you bypass these content filters.

Canada has some of the strictest anti-piracy laws in the world.

In 2016, 1,000 Canadians were sued by copyright holders Headhunter LLC and LHF Productions LLC. These companies won up to $5,000 per case in damages from torrenters of a single movie.

In the same year, Voltage Pictures sued 50,000 Canadians for torrenting The Hurt Locker – a case that even went to the Supreme Court of Canada.

The Copyright Modernization Act (Bill C-11) requires ISPs to retain logs of all your internet activity. If a copyright holder complains, the ISP can forward the complaint and enforce a penalty.

A VPN for torrenting hides your torrent IP address, which is essential for sharing files safely, avoiding copyright trolls, and staying clear of the Canadian courts.

Although Canadian Netflix has over 5,000 titles, its content is very different from US Netflix or Japanese Netflix.

That’s because streaming websites change their content libraries depending on which country you’re accessing them from.

A VPN spoofs your IP address and places your internet connection appear in a different location.

Most internet users today use public WiFi, which hackers can easily take advantage of.

A VPN protects you from open WiFi threats such as Man in the Middle Attacks (MitM), DNS spoofing, fake hotspots, and session hijacking.

With a VPN, you can protect your data transfers over insecure public WiFi connections, reducing the risk of sensitive data theft.

Using a VPN in Canada for Streaming

VPN software isn’t just for internet privacy and security. By spoofing your IP address, you can unblock restricted streaming content from around the world.

Based on our latest streaming tests, ExpressVPN is the best VPN for streaming in Canada.

The VPN service is very fast on long-distance connections, and it unblocks popular streaming platforms like Netflix, DAZN and HBO Max.

The instructions below detail how to access the American Netflix library from Canada.

To stream US Netflix from Canada with ExpressVPN:

Video: Unblocking US Netflix from Canada with a VPN

We tested VPN access from Canada to stream American Netflix. The video below shows our successful tests in unblocking US Netflix:

If you’re in Canada and want to protect your internet privacy, or stream geo-blocked content with a VPN, there are certain VPN services to avoid.

You can’t trust every VPN, and some are much more effective than others.

Poor quality VPNs are slow, incapable of accessing streaming services, and do not support high-bandwidth activities like torrenting.

Others can be actively harmful. A dangerous VPN can log your activity data, leak your IP address, or even inject malware or viruses. 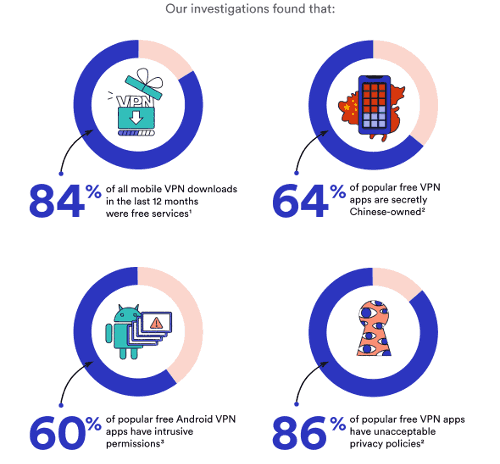 Many free VPNs are ineffective, and some even dangerous.

Popularity isn’t a measure of quality, either. Some of the free VPN services with the largest number of downloads are also the most insecure on the market.

The following VPNs have very slow speeds and offer a small choice of server locations. They’re not optimized for P2P activity or streaming, either.

We can’t list all the bad free VPNs as there are too many of them.

As a general rule, we recommend avoiding free VPNs altogether, unless they’re from a respected VPN company that offers a premium version too.

How We Test Canada VPNs

We measure every VPN’s performance in a number of key categories before we recommend it for use.

Here’s a summary of the areas we test for when recommending the top Canada VPNs specifically.

For use in Canada specifically, we test every VPN for:

Here’s a more detailed list of the exact categories we test for along with how much of our overall Canada rating they make up:

We measure the average download speed of every VPN before and after connecting to servers in Toronto, Montreal, and Vancouver.

In addition to our manual tests, our automated speed tests monitor the most popular VPN’s speeds constantly, so we have real-time VPN speed figures for every eight-week period.

We reward the VPNs that affect your download speeds as little as possible on both local and international connections, as they will be the best for streaming and torrenting.

We also measure how many servers every VPN has in Canada. The more servers there are spread across the country, the less congestion there will be across the network, which results in faster speeds.

VPN services with lots of servers in multiple Canadian cities are rewarded, along with VPNs with servers in nearby countries like the USA. If a VPN does not offer multiple servers in Canada, it receives a lower rating.

We research every VPN’s privacy policy in depth to find out whether a VPN stores your activity data, for how long, and whether that data could ever be shared with third-parties.

Services that have a strictly zero-logs privacy policy are rewarded, along with those that collect anonymous connection data. VPNs that collect unnecessary or identifying information are heavily penalized.

Minimum Requirement: Access to US Netflix and P2P support.
We Recommend: Access to multiple international streaming libraries and P2P-optimized servers.

We reward the services that work with multiple international libraries on streaming services such as Netflix, BBC iPlayer, Disney+. We also test every VPN to make sure it works with Canadian Netflix and DAZN from overseas.

Our torrenting tests measure for P2P-optimized servers and online protections for those interested in torrenting, which is particularly important in Canada due to its strict copyright laws.

There are certain security and usability features that are important for any high-quality VPN, not just those for Canada.

Though we do not assign these categories an exact weighting, we factor them into our decisions when calculating an overall rating.

For Canada, we make sure every VPN we recommend has the minimum security standard necessary to protect your data and privacy on public WiFi networks.

The most secure VPNs use the AES encryption cipher with a 256-bit key-length. More advanced VPNs will offer a range of connection protocols, and we reward those that use OpenVPN by default.

We use packet inspection technology to check for effective encryption and make sure every VPN we recommend is free from IP, DNS, and WebRTC leaks. Security features like a VPN kill switch and leak protection are also essential.

Every VPN app is examined on macOS, iOS, Windows and Android to see if it has a simple and user-friendly interface.

Using email and live chat assistance, we measure the customer support offering and evaluate the level of knowledge, speed of response, and the overall user experience on offer.

Finally, we take value for money into account and highlight the VPNs that offer more for less.